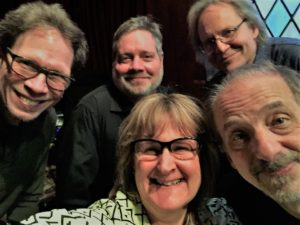 Joanne Leva, author of the poetry collection, Eve Would Know, published by Kelsay Books (2017), is the founder and executive director of the Montgomery County Poet Laureate Program (MCPL). Joanne has been writing and performing her original poetry since 1991 and has organized poetry readings at at the Souderton Art Jam for 100 Thousand Poets for Change, Headhouse Square for Earth Day, the Seven Arts Fest on South Street, The Theater of Living Arts, The Philadelphia Museum of Art, The James A. Michener Museum, The Mutter Museum, World Café, The Logan Inn, Ambler Theater, Farley’s Bookshop, and Barnes & Noble Booksellers.

John Mosemann graduated from the Philadelphia College of the Performing Arts with a Bachelor of Music degree. Upon graduating he began performing and teaching in Philadelphia. From 1987-1991 he performed in the casinos of Atlantic City and Las Vegas. From 1992-2002 John performed with the Mark Kramer Trio. This group performed extensively as a trio and also worked as a rhythm section with such jazz luminaries as George Coleman, Urbie Green, Lee Konitz, Lew Tabackin, Johnny Coles, Richie Cole, Arnie Lawrence, Jeremy Steig, Ralph Bowen, John Swana and Larry McKenna. During this time John also performed with legendary jazz musicians Eddie Gomez and Marian McPartland. In 2003 John joined the Steve Giordano Spacetet with whom he is currently performing. He has performed all over the United States.

Open Reading was hosted by Jennifer Hook and Alina Macneal